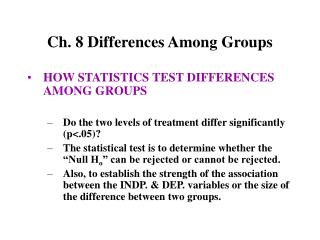 Ch. 8 Differences Among Groups HOW STATISTICS TEST DIFFERENCES AMONG GROUPS Do the two levels of treatment differ significantly (p<.05)? The statistical test is to determine whether the “Null H o ” can be rejected or cannot be rejected.

Tips for resolving conflict - . conflict defined. conflict is as a disagreement or disharmony that occurs in groups when

Differences in Culture - . differences in culture. societies’ differ along cultural dimensions what is culture? how/why

CHAPTER TEN - Differences between organizations and groups. an organization can be so large that most members do not know