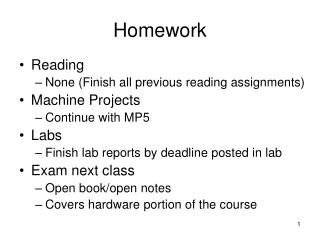 Homework - . for your homework, define the following words in 1-2 sentences: mary queen of scots , james i of england ,

Homework - . complete the connector activity on the ‘ group success ’ tab – reviewing the two videos complete the

Homework - Look at the space group p21/c (#14). this is the most common space group for small molecules. 1. no protein

Homework? - . time to bond or time to run??. the change. oklahoma has used pass skills for state testing standards

Homework - . complete narrative writing . introduction . objectives met on monday: practice the use of the periodic table

Homework….. - Homework…. as the sun goes down on another day. homework is hard for everyone!!!. kids are tired kids

Homework, Page 708 - . count the number of ways that each procedure can be done. 1. line up three people for a