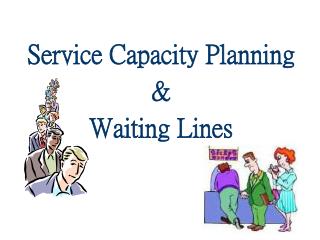 Service Capacity Planning & Waiting Lines. Learning Objectives. Identify or Define: The assumptions of the two basic waiting-line models. Explain or be able to use: How to apply waiting-line models? How to conduct an economic analysis of queues?.

Waiting Lines - . also known as queuing theory. have you ever been to the grocery store and had to wait in line? or maybe

Capacity Planning - . capacity refers to on upper limit or ceiling on the load that an operating unit can handle. the

Operations Management Waiting Lines - . example: a deterministic system. questions: can we process the orders? how many

Terminology and Classification of Waiting Lines - . terminology : the characteristics of a queuing system is captured by

Capacity Planning - . abi301. introduction. capacity refers to an upper limit or ceiling on the load that an operating