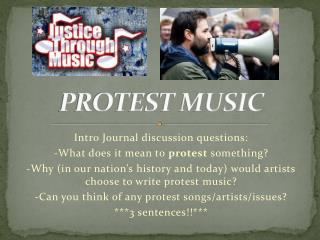 PROTEST MUSIC. Intro Journal discussion questions: -What does it mean to protest something? -Why (in our nation’s history and today) would artists choose to write protest music? -Can you think of any protest songs/artists/issues ? ***3 sentences!!***. What is protest music?. Vietnam War Protest Music - . protest music. during the war, many artists protested vietnam by singing for peace and

Vietnam War Protest Music - . “fortunate son” - ccr. some folks are born made to wave the flag, ooh, they're red,

Music of Combat, Patriotism and Protest

A BRIEF HISTORY OF PROTEST MUSIC - . i've got tapes i've got cd's i've got my public enemy my lily white ass is tickled

Protest Music and the Vietnamization of the war - . objective: reflect on protest music and collect evidence that