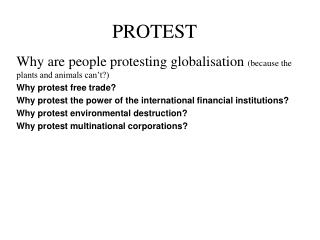 PROTEST. Why are people protesting globalisation (because the plants and animals can’t?) Why protest free trade? Why protest the power of the international financial institutions? Why protest environmental destruction? Why protest multinational corporations?. Politics of Protest - . chapter 18. although more women wanted to enter the workforce, employers were exclusively hiring