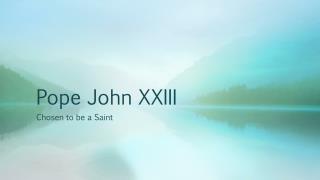 Pope John XXIII. Chosen to be a Saint. Angelo Giuseppe Roncalli Pope John XXIII. First-born son, third of 13 children of a farming family in northern Italy Ordained as a Priest in 1904 Elected as Pope on October 28, 1958 Died of Cancer in 1963 after being Pope for only five years Pope John XXIII - . a significant person in the christian tradition (1881-1963) for students. life of pope john xxiii in

Pope John XXIII - . chosen to be a saint. address of pope francis to pilgrims on the occasion of the 50th anniversary of

The Canonization of Pope John Paul II - . beloved pope to be named a saint on divine mercy sunday, april 27, 2014. john

The Canonization of Pope John Paul II - In many ways, the circumstances that the members of the church encounter today