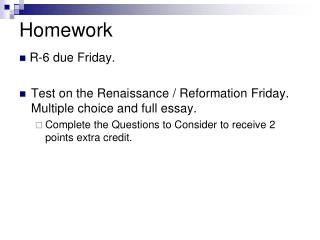 Homework. R-6 due Friday. Test on the Renaissance / Reformation Friday. Multiple choice and full essay. Complete the Questions to Consider to receive 2 points extra credit. . Aim: How did different groups in Europe respond to Martin Luther?. May 20, 2014. I. Church Reaction to Luther . Homework - . read the science of scientific writing (e-reserves) – we’re going to work through it in class on monday

Homework - . friday, we will be looking at slave resistance and the end of slavery in latin america. to prepare for this,

Homework - . i-1 due monday dbq due tuesday . aim: how did muhammad establish the religion of islam? . do now:

Homework - . r-4 due tomorrow multiple choice test on rome thursday. . aim: how did augustus pave the way for the pax

Homework - . due for wednesday (today): 211 starting at population and society 218 stopping at hiv / aids is exerting…

Homework - . hw #4 due tuesday. aim: what was the enlightenment and how did it change the way people thought about