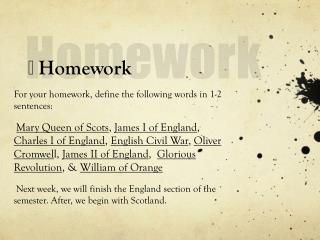 Homework 1 - . innervation of the stomach sympathetic

Warm-up - . update your table of contents write your homework – have it stamped get your “fungi assignment” out to

Homework, Page 530 - . match the parametric equations with their graph. identify the viewing window that seems to have

Homework, Page 708 - . count the number of ways that each procedure can be done. 1. line up three people for a

Homework 7 - I get an eerie, empty feeling around you…. next week in cs 60. nullpointerexception s?. quantity tokenizer

Homework - . frequently asked questions. should i assign homework to elementary students?. look at page 61 and use the