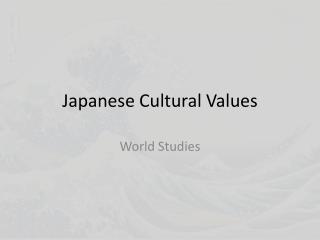 Japanese Cultural Values. World Studies. Background. While American and Japanese culture may have many similarities, there are some key differences. Japanese culture has been described as: isolated, serious, honorable, cold.

Cultural Change in the Era of Globalization: The Case of Japan - . soci 5013 spring 2004 kentaro yamazaki. statement of

Greetings in Japanese - . let’s learn common greetings in japanese! in each slide, you will see icon. click on the icon

Japan- the History and Culture - . human began living on the japanese islands approx 35,000 year ago. pottery and basic

ALL ABOUT: JAPANESE CULTURE! - . behavior in japan jillian, ben d., and tyler. they bow to greet one another and their

JAPANESE CULTURE - . japan. japan is an island . the capital of japan is tokyo it’s a very small but a very crowded

JAPANESE CULTURE - . japanese flag. japan is below russia, china, north and south korea. the island of japan is almost as

Japanese Netsuke: Keeping It All Together - . 18 th century japanese samurai the illustration shows the hair, kimono,

Japanese Background - . many aspects borrowed from china. chinese system of writing japan had no written language,

The Inspiration of Subaru as a Symbol of Cultural Value and Tradition in Japan Steven L. Renshaw - . astronomy. no

Simplicity and Form in Japanese Culture - . hss 7.5.4 trace the development of distinctive forms of japanese buddhism.