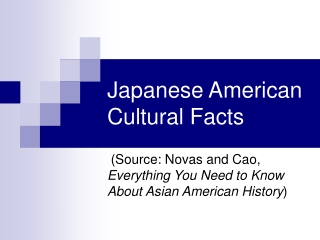 Japanese Cultural Values - . world studies. background. while american and japanese culture may have many similarities,

Japanese-American Internment - . “america’s concentration camps”. how could such a tragedy have occurred in a

Japanese – American Interment - . dani, catherine, kelsey. what was the japanese-american

Japanese American Internment - . executive order 9066. what is an interment camp?. internment means to confine or impound