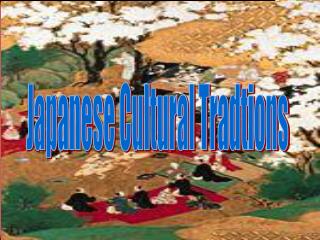 Japanese Cultural Topics. Japanese Cultural Tradtions. JAPANESE MYTH: THE UNDERWORLD. God Izanaki and Goddess Izanami created the islands of Japan when Izanami gave birth to the god of fire, she died from the burns. Japanese Cultural Values - . world studies. background. while american and japanese culture may have many similarities,

Key Topics in Cultural Geography - . introduction. the field of cultural geography is wide-ranging and comprehensive. to

Japanese Americans, At Home, In Camp Historical and Cultural Context - . history of discrimination against japanese and

Japanese Americans, At Home, In Camp Historical and Cultural Context - . history of discrimination against japanese and

Opening the Cultural Corridor: Japanese Art in the San Joaquin Valley - . a collaborative digitization project between

Japanese candy Store Online - Japanese Treats - Japan is well know for it's unique and delicious snacks and candy. there

Japanese Government - . by: carmen, lali, fernando, and leslie. prince shotoku was regent (replacement) to his aunt,