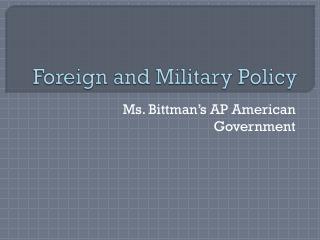 Foreign and Military Policy. Ms. Bittman’s AP American Government. What is foreign policy?. The goals of the US government in regards to other nations. How do we achieve it? Diplomacy (State Dept), economic aid, technical assistance. Statements of goals or ideas End world poverty Foreign Policy - . a nation’s plans for dealing with other countries. basic questions. are we the world’s policeman?

Foreign Policy - . ch. 17. stephanow, 2009. foreign policy: what is that?. everything a nation says and does in world

Foreign Policy - . hook and spanier’s framework. thus far…. the first section of this course dealt with the major