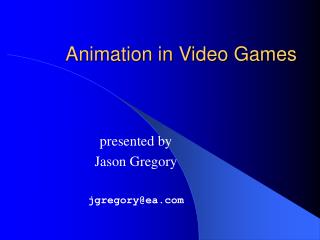 Animation in Video Games presented by Jason Gregory jgregory@ea.com Agenda The Goal of Game Animation Old School Animation Skeletons and Skins How Skinning Works (Graphically) The Math of Skinning Animation: Bringing a Character to Life Blending and other Advanced Topics The Number One Game Development Company - Http://www.capricorn-digital.com/logo-animation - we all love to be

So You Want to Be a Game Designer… - . a powerpoint by jane daniel. what does a game designer do?. crafts video games

Video Game Design - . lesson 1. game designer. person involved in the development of a video game usually works on a part

The effects of video and computer games - . positive effects . helping behaviour – research has shown that playing a