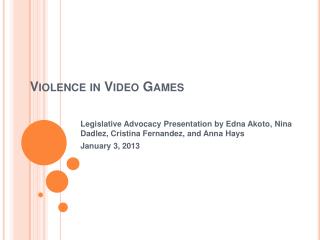 Do video games create violence in people? - . my task. we have been asked to produce a powerpoint on whether games can or

Representation of Race, Gender, and Violence in Video Games - . grand theft auto. kayla stevenson. how it is not just

Homosexuality in Video Games - Who is ambiguous? who is closeted? who is open? bishōnen video game gay protagonist

Audio in Video Games - Http://fallout.wikia.com/wiki/sonic_emitter_%28weapon%29. audio in video games. an adaptive and