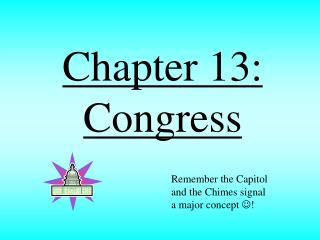 Chapter 13: Congress. Remember the Capitol and the Chimes signal a major concept !. I. Congress versus Parliament. A. Comparison with British Parliament. Parliamentary candidates are selected by party a. Become a candidate by persuading party to place your name on ballot