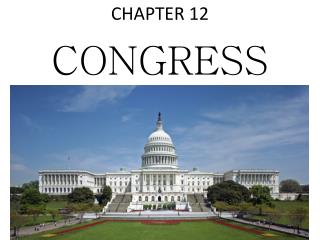 Chapter 12: Congress in Action Section 1 - . objectives. describe how and when congress convenes. compare the roles of

Chapter 12: Congress in Action Section 4 - . objectives. describe how a bill is introduced in the senate. compare the

APAG Ch. 12 Congress - . 1.what does bipartisan mean? give an example of partisanship.. . bipartisanship is something