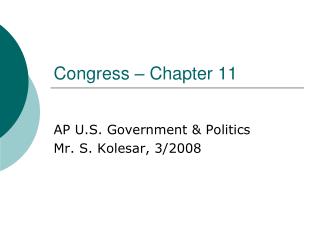 Congress – Chapter 11. AP U.S. Government & Politics Mr. S. Kolesar, 3/2008. The Ultimate Power Broker? . “First Branch” of American gov’t Power of the purse Can pass a law over exec. veto Can expand or contract the appellate jurisdiction of the Supreme Court.