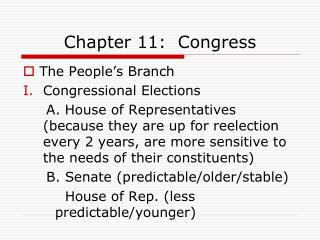 Chapter 11: Congress. The People’s Branch Congressional Elections A. House of Representatives (because they are up for reelection every 2 years, are more sensitive to the needs of their constituents) B. Senate (predictable/older/stable)