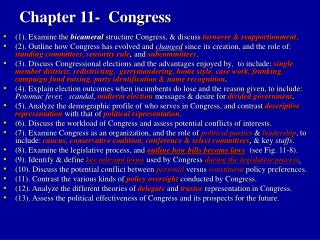 Chapter 11- Congress. (1). Examine the bicameral structure Congress, & discuss turnover & reapportionment . (2). Outline how Congress has evolved and changed since its creation, and the role of: standing committees, seniority rule , and subcommittees . Chapter 11: Powers of Congress - . delegated powers. there are three types of powers granted by the constitution. article