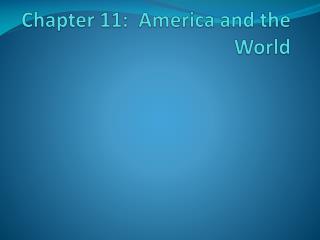 Chapter 11: America and the World Chapter 11: America and the World. Section 1: Expansion in the Pacific. Imperialism: The quest for colonial empires. Between 1876 and 1915, a handful of industrialized nations seized control of vast areas of Africa, Asia and Latin America.

Chapter 11: America and the World