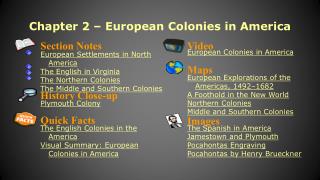 What do you know about America? - . since the late 1500s british adventurers had fought against the native american

The American Colonies Emerge - . chapter 2. spain’s empire in the americas. section 1. main idea. throughout the 1500s

The English Colonies in America - . colonial regions. english settlers established colonies in north america for many