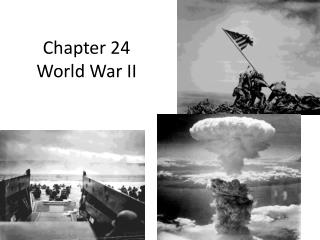 Chapter 24 World War II. Aggression Leads to War. The conditions for the Great Depression helped to set the stage for a new world war Several nations came to believe that democratic governments were too weak to solve problems. They turned to dictators in hopes of having their problems solved.

World War II - . chapter 26. road to war. section 1. the rise of dictators. dictator – a leader who takes control by

Chapter 11 Unit 7 - . in your journal, place a timeline of events from the paleo to current times. section 5 page 370.

Chapter 4 - . attitudes: evaluating the social world. this multimedia product and its contents are protected under