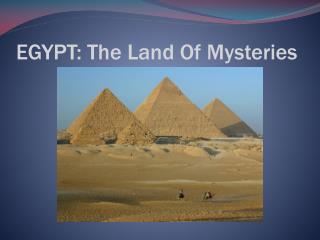 EGYPT: The Land Of Mysteries EGYPT: The Land Of Mysteries

Unlock Mysteries Of Egypt By Touring This Wonder Land - Egypt tour is blended with excitement, knowledge and pleasure.

5 Places You Should Visit In Egypt - Egypt is the home of ancient memories and mysteries; the land of pharaohs and the