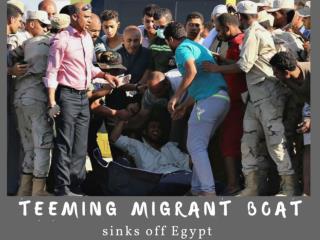 Hundreds of migrants may have perished after a wooden vessel capsized in the Mediterranean Sea off Egypt, in what is the latest disaster for migrants desperate to reach Europe. The Migrant Experience - . the migrant experience was about the migration to the west. the reason people did this, is

Egypt vs. Mesopotamia Drill - . write “e” for egypt, “m” for mesopotamia or “b” if it applies to both egypt

Redemption out of Egypt - . the journey from egypt to israel is typical of our salvation . god redeems us from sin so he

EGYPT - . 4 th stop on our trip around the world. a quick video to begin!. welcome to egypt. locate egypt. egypt. most of

Boat Smart-Boat Safe Have Fun on the Water - . the following information is provided from “boat smart-boat safe”

Intro to Egypt - . chw3m. egypt. egypt coalesces into a cohesive kingdom around 3100 bce not long after establishment of