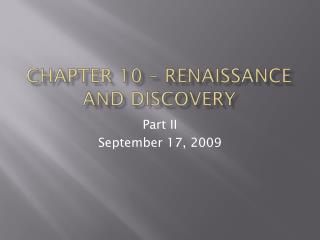 Chapter 10 – Renaissance and Discovery. Part II September 17, 2009. The story…. The mid 1400’s saw both chaos, and the flowering of new thoughts and ideas. Europe was dealing with 3 major crisis; Demographic Black Death and Population Loss. Population is slowly recovering Political

Chapter Seventeen - . renaissance artists. “the eye , which is called the window of the soul, is the chief means

The Harlem Renaissance - . “the negro movement”. where &amp; when …?. -the harlem renaissance took place in new