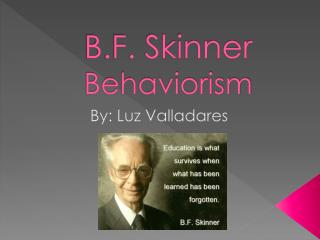 B.F. Skinner Behaviorism. By: Luz Valladares. Biography. Burrhus Frederic Skinner was born on March 20, 1904, in the small Pennsylvania town of Susquehanna.  His father was a lawyer, and his mother a strong and intelligent housewife.