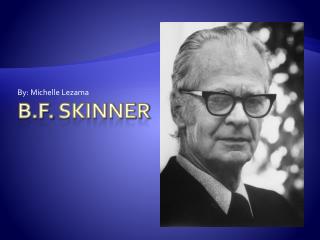 By : Michelle Lezama. B.F. Skinner. Introduction. Burrhus Frederic Skinner was an American psychologist , inventor, author and poet . He developed the system of operant conditioning and developed his own scientific philosophy known as Radical Behaviorism . Early Life.