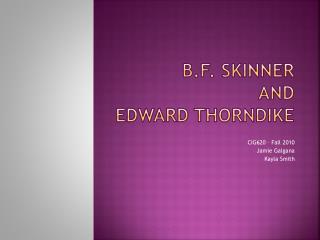 B.F. Skinner and Edward Thorndike. CIG620 – Fall 2010 Jamie Galgana Kayla Smith. The life of Edward Thorndike. Born: Williamsburg, Massachusetts, on August 31, 1874 Raised in a clergyman's household "the only sure foundation for social progress.“