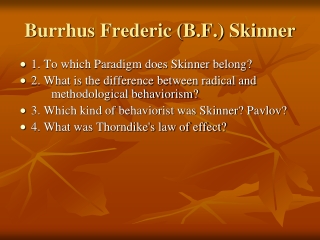 Burrhus Frederic (B.F.) Skinner. 1. To which Paradigm does Skinner belong? 2. What is the difference between radical and methodological behaviorism? 3. Which kind of behaviorist was Skinner? Pavlov? 4. What was Thorndike's law of effect?. Skinner's Behaviorism - . i. behaviorism as a version of physicalism ii. implications for education and government iii.

Behaviorism - . b. f. skinner. skinner’s theory. “all we need to know in order to describe and explain behavior is