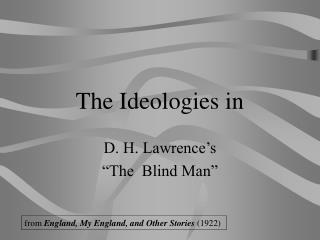 The Ideologies in. D. H. Lawrence’s “The Blind Man”. from England, My England, and Other Stories (1922) . Leading Questions.

Ideologies - . the way in which we interpret our world, it determines our values and actions. “ what i believe ”.

Ideologies - . definition : the term used to identify a person’s political paradigm, which acts as a frame of

Ideologies - . definition – nationalism is a common bond shared by a group of people who feel strongly attached to a

Ideologies - . q. why are they so important? a. they guide the beliefs and conduct of statesmen, political thinkers and

Ideologies - . to what extent should ideology be the foundation of identity?. what are humans like and why do they act as

THE IDEOLOGIES BEHIND EXPANSIONISM - . kita ikki , the radical nationalist, wanted to have a military coup to japan of

Economic Ideologies - . areas of dispute. what causes instability in the economy? is the economy self-correcting? should

Conflicting Ideologies - . -the differing ideologies between the two powers caused a lot of bad blood between them. -the