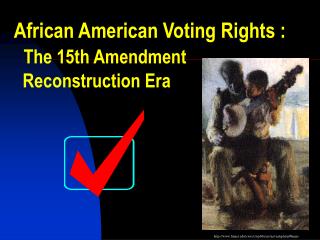 African American Voting Rights : The 15th Amendment Reconstruction Era. http://www.liunet.edu/cwis/cwp/library/aavaahp.htm#banjo. The First Vote. What might the African American man be thinking about as he cast his first ballot?. What legislation gives him the right to do so?.

Finding Your African American Ancestors - . by jerry merritt october 15 , 2011. objectives. suggest resources to get you

The Cold War as a Cause of the Civil Rights Movement - . the cold war helped shape african american struggles for social