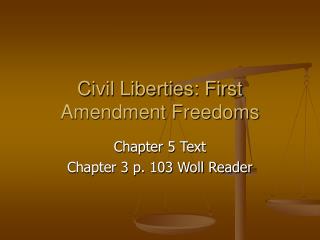 Civil Liberties: First Amendment Freedoms. Chapter 5 Text Chapter 3 p. 103 Woll Reader. A Commitment to Freedom. The listing of the general rights of the people can be found in the first ten amendments in the Constitution, also known as the Bill of Rights . November 20, 2007 - . how did the u.s. promote war and attack civil liberties? what social changes were made? quiz on