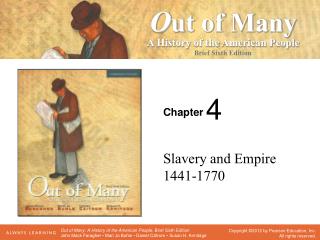 Chapter Three The Development of Dominant-Minority Group Relations in Pre-Industrial America: The Origins of Slavery

Slavery in America - . from colonial america to antebellum u.s. earlier forms of slavery. slavery existed in many places

Chapter 10 “And Black People Were at the Heart of It”; The United States Disunites over Slavery - . i. free labor ~

The Expansion of Slavery and Anti-Slavery - . i. 4 common myths about slavery. middle school interpretation of slavery:

The Road To Independence: (1770-1776) Chapter 4 - . the greed for territory produced by mercantilism also meant that