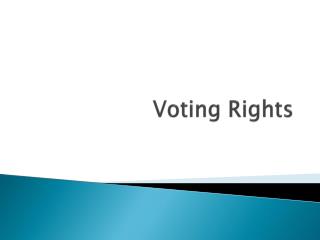 Voting Rights. American Voters. Vote less than any other people in Western societies. Half of registered voters actually vote in presidential elections, and fewer vote in state and local elections. The only restrictions on voting are the insane, convicted felons, and the young.

Selma, Alabama - . on march 7, 1965, about 600 people marching for voting rights were attacked and beaten by police as