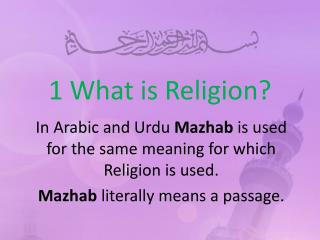 1 What is Religion?. In Arabic and Urdu Mazhab is used for the same meaning for which Religion is used. Mazhab literally means a passage. Definition. To believe in supernatural beings and act according to their will. The Basic elements of a Religion. Beliefs .

RESURECTION OF TRUE RELIGION - . god’s call to a dying world the 3 angel’s messages. a call at the present

Agricultural Societies Chapter 14 From Egalitarianism to Kleptocracy The evolution of Government and Religion - . text

History of the Science of Religion - . a. religion—from latin “religio” 1. originally seems to referred to as

Chapter 12: Religion - The meaning of sacred meaning soc 100 dr. santos what does religion do for us? meets basic