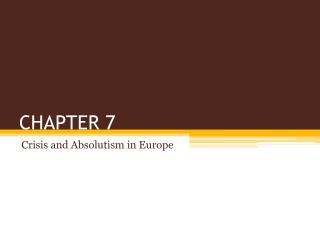 CHAPTER 7 . Crisis and Absolutism in Europe. Chapter 7, Section 1 Europe in Crisis: The Wars of Religion. French Wars of Religion. Calvinists vs. Christians What were they doing? Aggressively trying to win converts and eliminate each others authority. Two Groups: Huguenots