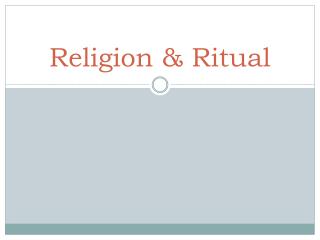 Religion & Ritual. Religion. A Western concept like work/economy/politics/technology. In western society, Religion is mostly seen as a clearly delineated aspect of society, separate from the other terms above. Not the case within all cultures. Ex: Ancient Egypt. Islam: an Introduction - Session plan the religion of islam? muhammad’s life &amp; significance what is the quran?

The Psychology of the Person Chapter 5 Neo-Freudians - . naomi wagner, ph.d lecture outlines based on burger, 8 th

Hinduism - . unit four. the name. hindu is universally accepted as word that refers to the religion of india. hindu’s

India History - . what is the dominant religion in india?. hinduism. hinduism in the world. pakistan is dominated by

Religion - . religion as a social institution. religion: set of institutionalized beliefs and practices that deal with