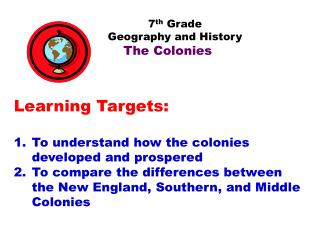 7 th Grade Geography and History The Colonies Learning Targets: To understand how the colonies developed and prospered To compare the differences between the New England, Southern, and Middle Colonies . Do Now: Set up new notes. The new topic is “The Colonies” Footings, Foundations, and Concrete - 2. learning targets. describe the procedure for staking out a house location.list