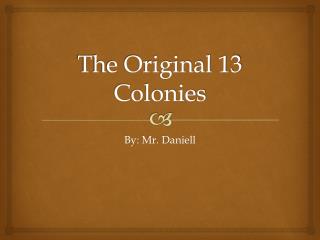 The Original 13 Colonies. By: Mr. Daniell. The Thirteen Colonies. There are two major reasons for the establishment of a colony; profit or religious freedom. William Penn’s Pennsylvania was the most religiously tolerant colony. The Original 13 Colonies - . reasons why england valued its north american colonies. 1. the colonies supplied food and

The 13 Original Colonies - . click to continue. click on a colony to visit it!. massachusetts. new hampshire. rhode

The Establishment of the 13 Original Colonies - . roanoke and jamestown. england’s early settlement of virginia.

The Settlement of the Original 13 English Colonies - . americans: who are we and how did we get here?. great britain

The Thirteen Original Colonies - . who? what? when? where? and why?. ms. dalzell’s fourth grade class. objectives.