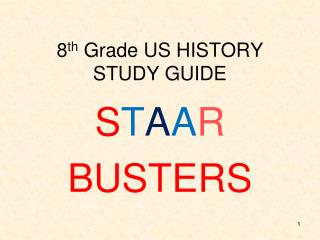 8 th Grade US HISTORY STUDY GUIDE. S T A A R BUSTERS. First English colony in the Americas was established where and in what year Answer: Jamestown, Virginia 1607. The Declaration of Independence was signed when?. Answer: 1776. 8 th Grade US History Week 25 Benchmark - . to hear each question, click on the number of the question on the next slide.