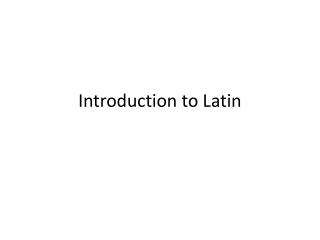 Introduction to Latin. Why do we study Latin?. “It is not so much excellent to know Latin, as it is a shame not to know it.” --Cicero THE LATIN VERB - . the dictionary entry for a verb will give you the following information: - i -form of present tense -

Latin America - . history of the land. fun fact of the day. september 20,

Behind Latin Dance - . what we fail to see in dancing! by: maritza barron. introduction. background of dance mexican