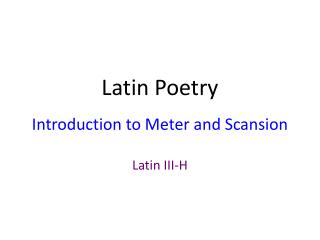 Latin Poetry Introduction to Meter and Scansion. Latin III-H. Poetry. What is it? Do you like it? What is its purpose? . Latin Poetry Introduction to Meter and Scansion - . latin iii-h. poetry. what is it? do you like it? what is its

Meter and Scansion - . the intended effects of stress. the foot- --1 stressed and 1 or more unstressed syllables iamb u /

Latin Meter - What is meter?. meter is the rhythm of a latin poem.. determined, in latin, by the length of the vowels in

Meter in poetry - . define, in your own words, what you believe meter and tone to be in poetry. if you can, describe as

Meter in Poetry - . a nuts and bolts discussion which leads to understanding. rhythm. ( def ) the pattern of stressed and

Meter in Poetry - . yaerin song. what is meter in poetry?. repeated arrangement of stressed (accented/ long) and

Meter in Poetry - . by: sunpyo hong. what is meter?. in poetry, meter is the basic rhythmic structure of a verse. in a

Meter in Poetry - . by justin yoon and christopher choi. introduction. in poetry, a meter is a recurring pattern of

Poetry: Rhyme, Rhythm, and Meter - . rhyme. the correspondence of sounds internal rhyme: rhyme that occurs within the

Meter in Poetry and Verse - . by francis bae. what is a meter in a

Scansion - . kelsey powell. scansion-. dictionary definition: the analysis of a poem’s meter. this is usually done by

SCANSION - . breaking down meter…. meter. meter ( latin: metrum, -i n. measure) is like the time signature in written

Scansion - . the rules of poetic structure. a look at structure…. whose woods these are i think i know his house is in

Scansion - . used to describe rhythm mark the stresses (/) and absences of stress (u) count the number of feet. to