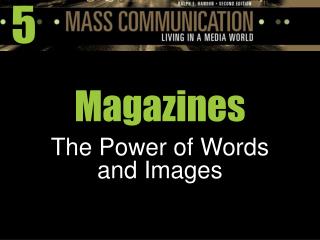 Magazines. The Power of Words and Images. Development of a National Culture. Daniel Defoe: founded The Review , the first magazine in England, in 1704 looked just like the newspapers of the era covered public policy, literature, and morals. Edward Cave Magazines - . the power of words and images . development of a national culture . daniel defoe: founded the review , the

Magazines in the Age of Specialization - . chapter 9. magazine specialization. like radio, magazines specialized to

Magazines in the Age of Specialization - . chapter 4. “cosmopolitan ’s ability to reinvent itself repeatedly over the

Evaluation of Print Media - 12. evaluation of print media. the role of magazines and newspapers. high-involvement .

Chapter 5 Magazines: The Power of Words and Images - . early magazines. what is a magazine? a publication of lasting

Free online Top Business and Lifestyle Magazines of UK - Mibusinessmag is one of the top business magazines, it is best

Genre and Music Magazines - . - to consider the importance of targeting audience by genre - to understand the

Research on existing college/university magazines - . magazines. its easy to understand that this magazine created for

Using Magazines and Journals - . scholarly and popular. many types of periodicals. periodicals is a broad term for