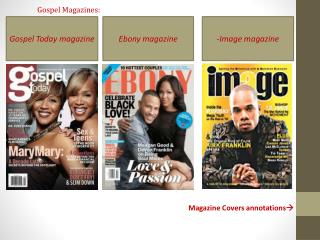 All about Sources - . how to make sure you have good sources and the right sources!. the types of sources. print books

The Gospel of the Kingdom: The Hope of Israel - . emphasis in the christadelphian community has always been on one

The Watchtower AKA Jehovah’s Witnesses - . why be concerned with the watchtower?. which jesus and which gospel. knowing

Trey Songz JET Magazine A. Johnson Publications - The name of the magazine is always put in the corner which is their

Study in Matthew’s Gospel - . presentation 20. sermon on the mount the inwardness of the law: adultery chap 5 v27-32. Goal 7 - . the progressive movement ( 1890-1914 ) the learner will analyze the economic, political, and social reforms of

Exciting “New” Gospels? W hat Catholics need to know about the Gospel of Judas and other apocryphal writings