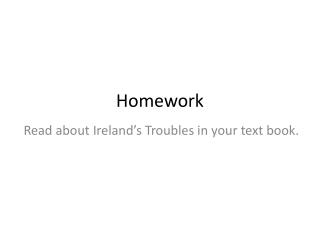 Homework. Read about Ireland’s Troubles in your text book. Today’s Topics. SCOTLAND IRELAND. Scotland. Scotland. The Kingdom of Scotland was an independent state until 1707, although from 1603 England and Scotland were ruled under the same king.

Homework and Study Skills - . benefits of homework. t eaches children how to take responsibility for tasks and work

Get homework out Prepare for reading quiz - . reading quiz. list 1 american colony today. give an example of an elongated

Homework - . turner prize – what did you think ? did you find any themes in the artist’s work? what is a theme? ideas

Warm-up - . update your table of contents write your homework – have it stamped get your “fungi assignment” out to

Is Homework Good for You? - . when looking at a pile of homework, do you ever wonder, why bother? even if you enjoy the