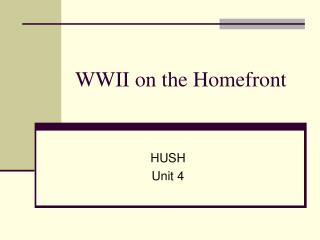 WWII on the Homefront. HUSH Unit 4. The Shift to Wartime Production. FDR and his administration set out to win the war at home by converting heavy industry to wartime production Office of Price Administration (OPA) Controlled rent and prices from inflation Lord of the Flies - . intro 1.4.3. today we’ll comprehend the atomic age and how it was experienced by the survivors of

BUZZWORDS! - . iron curtain. the political, military, and ideological barrier erected by the soviet union after wwii to