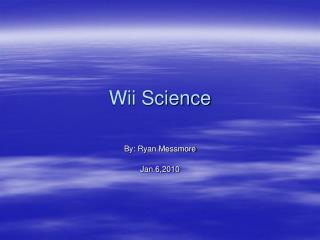 Wii Science. By: Ryan Messmore Jan.6,2010. The Big Question. Can playing Wii adjust your pulse? Does it matter if you are older? Does it matter what game you play? Explanation: I want to test if playing the Wii adjusts your heart rate like exercise. Step 3: The hypothesis. Using the Wii - . center for human modeling and simulation university of pennsylvania. wii as input for a mechanical

Yes Wii Can - . there is been a progressive increase of alzheimer’s cases in the us (5 million), and it is the 6 th

End of WII - . social studies 11. d-day: the normandy invasion. liberation of france, belgium, and the netherlands.

Wii Sports Resort - . representation. what is represented?. the island the people the scenery the ‘props’. the