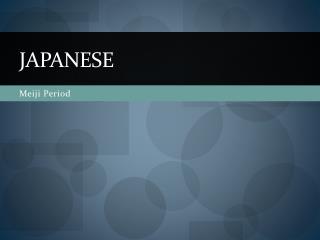 Japanese. Meiji Period. 4.3 Harnessin g the energies of the people. The self-help philosophy emerging in the 1870s was a potential problem. For the new regime, if individuals became too strong and independent, they could prove difficult to control. Japanese candy Store Online - Japanese Treats - Japan is well know for it's unique and delicious snacks and candy. there

Japanese Government - . by: carmen, lali, fernando, and leslie. prince shotoku was regent (replacement) to his aunt,

Japanese Questions - . the following presentation will allow you to practice your japanese questions and answers. how are

Japanese Jeopardy - . rules:. answer the answers with questions. or question the answers…. procedures. we will have 2

Japanese Whaling - . by: valerie morales. what is whaling?. it is when you hunt whale’s for the oil and meat the oil