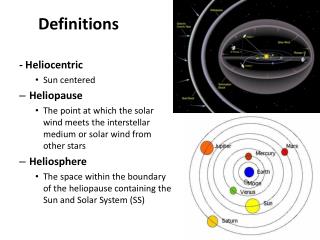 Definitions. - Heliocentric Sun centered Heliopause The point at which the solar wind meets the interstellar medium or solar wind from other stars Heliosphere The space within the boundary of the heliopause containing the Sun and Solar System (SS). Definitions (cont’d).