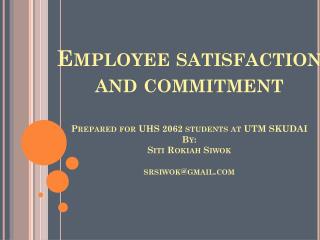 Employee satisfaction and commitment Prepared for UHS 2062 students at UTM SKUDAI By: Siti Rokiah Siwok srsiwok@gmail.com. JOB RELATED ATTITUDES & BEHAVIOURS. Assessing employee attitudes and behaviours about their jobs is one of the major tasks of IO psychologist.

Challenging Behaviours - . a reality, a responsibility, a challenge an opportunity to ‘get it right’. the project. to

Industrial-Organizational Psychology Learning Module Job Attitudes - . prepared by the society for industrial and